Regional Anatomy and Relationship to Veins

The upper part of the pacemaker pocket lies in this space and the lateral part of the pacemaker pocket incision lies across the roof of the deltopectoral triangle. Although the strict anatomic definition of deltopectoral triangle is quite narrow, a wider depression can be “palpated” and this is the general area in which direct vascular punctures are attempted 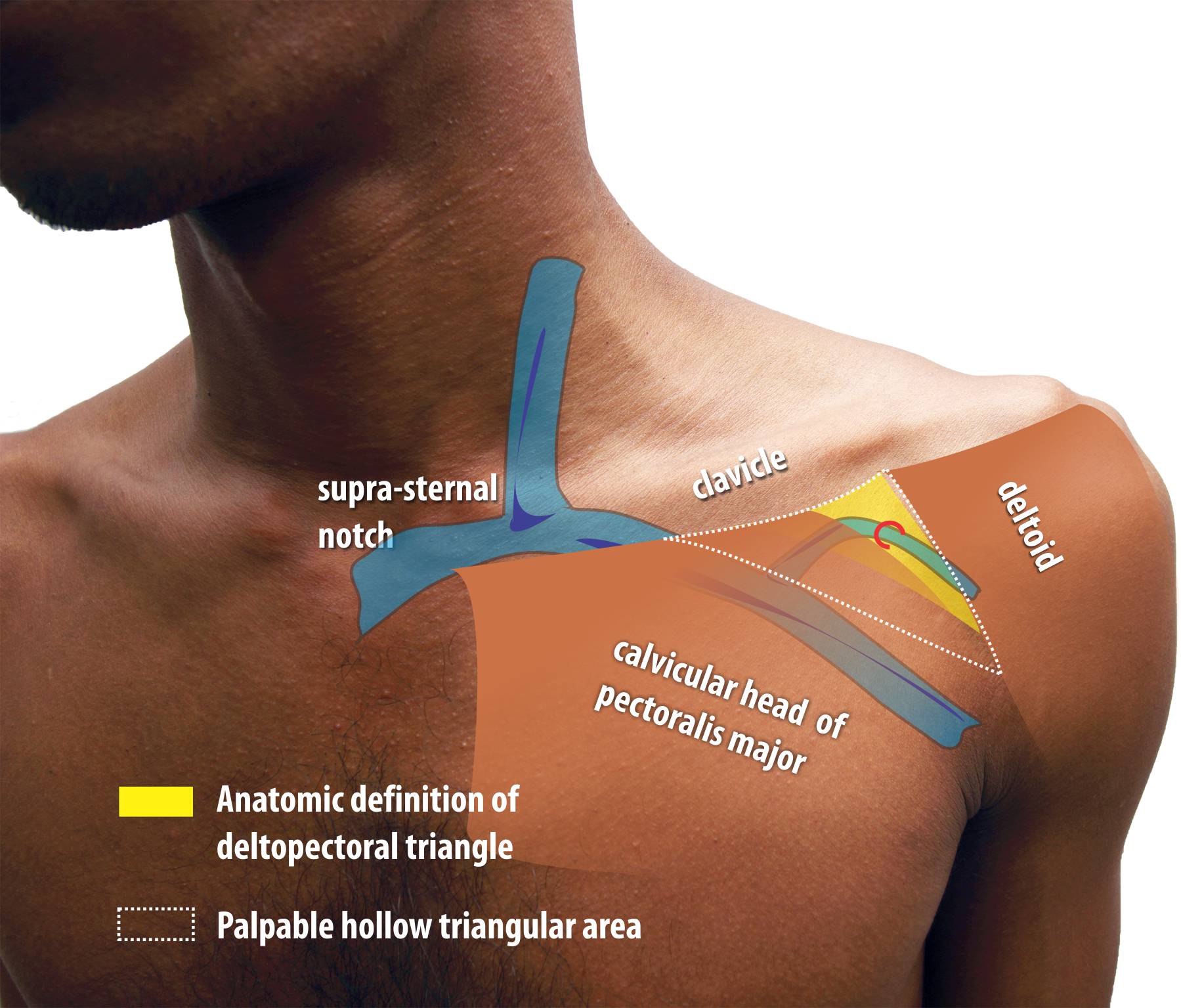 Figure : The Deltopectoral Region. Yellow colored zone corresponds to strict anatomic definition but the physically palpable triangular depression is of more practical relevance to punctured venous access. The cephalic vein lies on a grove just medial to the medal margin of deltoid and is sometimes marked by a skin crease. The cephalic vein pierces the fascia to enter the deeper aspect of the pecoralis major and enter the axillary vein

The deltopectoral triangle is a triangular depression formed between the clavicle above, lateral border of the pectoralis major medially and the medial border of the deltoid laterally. This narrow triangular area contains investing layers of the clavipectoral fascia and the cephalic vein on its roof which it pierces. The investing layers of the clavipectoral fascia extend laterally along the vein and artery to blend with the axillary fascia.

The axillary vein which is the vein segment between the subclavian and the brachial vein is an extra-thoracic structure which lies deep to the pectroralis major muscle and is a component of the anterior wall of the axilla. The upper limb drains to the central venous system by means of axillary vein which becomes the subclavian vein as it travels above the first rib towards the thoracic inlet. The subclavian vein lies anterior to the artery on the anterior aspect of the first rib when it crosses over it. medial to the first rib, the vein is considered an intra-thoracic structure. 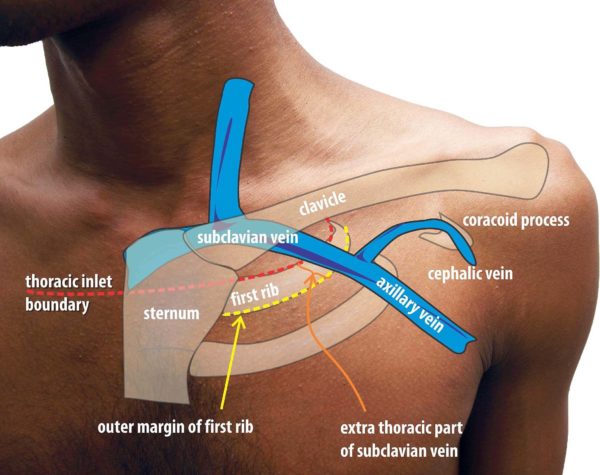 Figure : The axillary vein becomes the subclavian vein after traveling medially over the first rib. It lies two finger breadths below the coracoid process tip but this is a difficult structure to palpate unless the patient is thin. The vein component which overlies the first rib (i.e. between the medial and lateral border of the rib shaft) is termed the “extrathoracic component of the subclaivan vein”. This is the  target for accessing the vein using fluroscopic techniques.

Figure : Same schematic above the venous pathways as above – visualized with the aid of a venogram

For punctured access (seldinger technique), the needle is either entered through the medial aspect of the delto- pectoral triangle (subclavian access) or from the lateral edge of the triangle (extra-thoracic subclavian or axillary vein access).

The subclavian vein arches over the anterior aspect of the pleural dome while lying directly behind the medial 1/4 of the clavicle. This portion of the vein is relatively constant but accessing has more risk of a pneumothorax in view of close proximity to the lung apex. Furthermore, inserting a pacemaker lead in this segment carries the risk of lead crush from the the subclavius muscle / first rib as they lie very close. The tip of the coracoid process can be felt deep within the lateral part of the deltopectoral triangle.The axillary vein is said to lie deep to the pectoral major muscle at a point two finger breadths below the tip of the coracoid process. However this is difficult to palpate in most people unless they are very thin or emaciated.

The cephalic vein which drains the superficial lateral part of the upper limb lies within the lateral part part of deltopectoral triangle along the groove and dives deep through its floor to enter axillary vein which lies deep behind the pectoralis major muscle. Exit branches of the thoraco-acromial artery pierce the floor of the deltopectoral triangle on its lateral part and may be encountered at the lateral edge of the pocket. (these can rarely cause bothersome bleeding to the pocket – see practical point in the section of making the pocket)

Pacemaker implantation is done in fasting state and therefore depending on the circumstances, the patient might be significantly dehydrated. Veins collapse in dehydrated patients and makes access difficult – hence if the patient is fasting for an excessive amount of time or if there are clinical features suggestive of dehydration (e.g. collapsed peripheral or neck veins) – it would be prudent to re-hydrate intravenously before the procedure.

If technically possible on the operating table, a head-low tilt of 5-10 degrees facilitates venous access (by venous distention) and most importantly, minimizes risk of air-embolism during subsequent lead insertion

Video : Local anaesthesia for puncture – about 10 ml of 1% lignocaine is injected under skin in a triangular area in which the base is the clavicle and apex is just distal to the skin puncture side. (Author’s earlier practice was to inject 2 ml at the area of skin puncture – but the above technique is more effective in case of a difficult puncture and it also primes the pocket incision area with anaethesia which decreases pain on injecting along the skin line later) For a detailed discussion on local anaesthesia see here :

Video : Ensure that the needle is not tightly attached to the syringe as if you struggle to remove the syringe when the needle has entered the vein, you may lose access. The syringe should be a 5 ml or 10 ml syringe with about 2 ml of flush. Large syringes make too much suction and attract fat and other debris into the needle which can obstruct its lumen.

Figure : Comparison of needles – Unless there is s specific need, use only the needle provided with the lead puncture set – it’s tip is relatively blunt and is a safety feature to prevent rapid entry into tissues. Using other sharp vascular puncture needles increase the chance of inadvertent pleural puncture. At times you may have to use the sharp 18G femoral needle if the vein “appears to be not getting punctured” or the extra 1 cm of this needle is needed in an obese patient.

For cut-down access, an incision is made over the lateral edge of the roof of the deltopectoral triangle (along the groove) and the cephalic vein is opened up. This method is not described here as the author has minimal experience in the technique. However in experienced hands it is a elegant technique which has no risk of creating a pneunomothorax. Although very safe, this technqiue has a several drawbacks :

The direct puncture method of the subclavian vein is relatively easy than extra-thoriac subclavian / axillary vein access as the vein is predictable and the landmarks are easily obtainable – but has two important limitations:

The extra-thoracic subclavian or axillary vein approach reduces the risk of pneumothorax but is technically challenging as the axillary vein has a more variable course compared to the stable subclavian vein (although this vein diameter may be larger than the subclavian as less surrounding tissue compression) . There is no issue of lead crush and this is the technique of choice when using large leads such as ICD leads or when multiple leads are used (e.g. in CRT) Both techniques are described in detail in the subsequent sections.

Go Back : Local Anaesthesia
Next : Role of Venography
Menu